A fantastic month so far of performing and hearing great live music!

Hey, all! Been having a blast this October playing and hearing great live music! Since this blog is partially to remember great musical adventures I'll run through a recap of the last couple weeks.

On Oct. 2, the great Robert Cray performed at North Central College. My sister Liz and brother Mike were there, and Liz got to meet Robert! We've seen him many times over the years. I was at the Alpine Valley show in 1990 for Stevie Ray Vaughan's final performance that included Robert, Eric Clapton, Buddy Guy, Jimmie Vaughan and others. Robert sounded great in the Wentz Concert Hall, and his playing, singing and songwriting is as superb as ever!

On Oct. 3 I made my debut playing electric guitar in band. The very talented Clarence Goodman invited me to join Lyons Township High School class of 1979 friends to perform at their 35th reunion at a joint called Saban's in Hodgkins (great food!). The band featured fellow Suspended Animation bandmate Dave McGranahan on harmonica, Clarence on acoustic guitar and vocals, Kim Treiber (LT '79 who now lives in New Mexico) on lead vocals and acoustic guitar, Rick Demski on bass and Kim's cousin Randy Ourada on drums. I played lead guitar with the house band at the end of the evening, and opened the night with a 30-minute set of acoustic originals and covers. My cousin Shelly Powers was in from Arizona, and I had a ton of fun hanging out with Shelly and her St. Cletus classmates from the old neighborhood. I was especially surprised when Betty Tompkin, mother of some good childhood friends from Timber Trails Swim Club, popped in unexpectedly after seeing a post on Facebook.

Sat., Oct. 4, was the big Barn Dance show at the center of my musical universe, Chicago Street Pub. Bad Saddles, Alex Hoffer Band, Edward David Anderson and The Leadfoot Band performed. All the performances were awesome and the atmosphere was electric with many friends on hand! I captured video of some of Leadfoot's performance.

On Wednesday, Oct. 8, after my son Noah met actor/author B.J. Novak at North Central College, I popped by Tribes Alehouse in Mokena for a couple tasty craft beers, great company and awesome live, original music hosted by John Condron. I've really enjoyed making near-weekly appearances at Tribes' open mic for the past three years and learned a lot about performance by watching John and so many other talented people that appear there regularly. When I compare myself now to where I was three years ago, when I set aside the bass and picked up the acoustic guitar after the final Big Eddy Springs Blues Band performance, I'm very happy with the progress I'm making as a musician and performer. Every time I play feels like a personal best.

Thursday, Oct. 9, found me at the White Horse for open mic hosted by Brian Barry. Brian's such a great guy, and his wife Kristin is very involved musically as well managing appearances by Alex Hoffer and others. Great musicians, singers and songwriters like Nick Domberg and Allison Flood were there, and Aly, Brian and I performed "Red Rover" together. I never cease to be amazed by the broad and deep pool of musical and artistic talent that fills Will County!
BTW, Allison Flood and John Condron are topping the bill when I open for them Nov. 1 at Lewis University's Studio Theatre. We'll each do about a 30-minute set of acoustic songs, mostly originals likely, in a benefit for the Heritage Theatre Company alumni troupe in residence there. 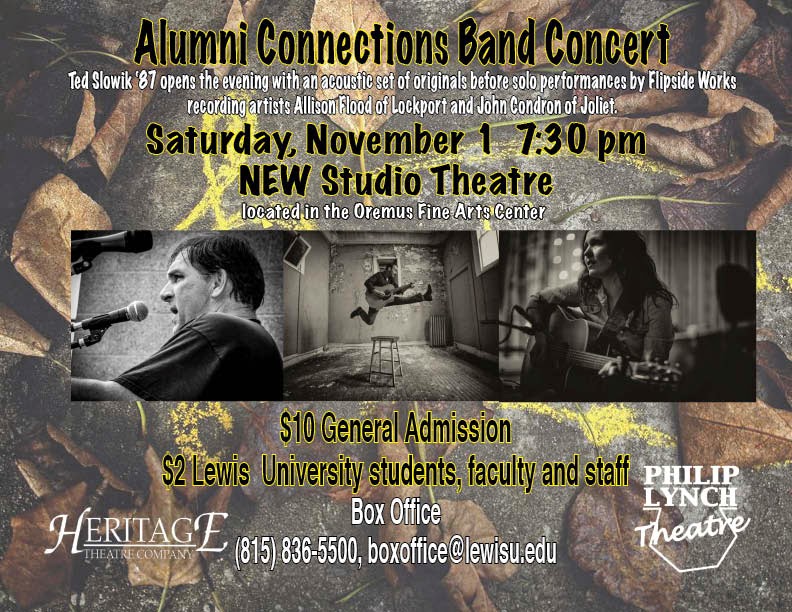 As if that wasn't enough fun, on Friday, Oct. 10, I was back at Chicago Street Pub to hear Allison's very talented husband Chris Flood open for The Righteous Hillbillies. The Hillbillies have become my favorite band, and it's been great getting to know singer Brett James (who did the artwork for my "Comfort Zone" CD), bassist Jeff Bella and drummer Barrett Harvey. I've been taking guitar lessons since Christmas from Hillbillies lead guitarist Kev Wright and owe a great deal to him for the progress I continue to make. Taking music lessons builds your self-esteem and confidence in addition to your abilities, and I find those improvements transfer over into all areas of your life.
Also this week I was honored when Kev asked if I'd warm up the crowd when his fellow student Chase Patrick Walsh celebrates the release of his CD "Your Friend the Robber" at an all-ages show at 2 p.m. Sunday, Nov. 16, at Chicago Street Pub. I met Chase when I was helping publicize Hopstring Fest this year and was immediately impressed by his talent, abilities and work ethic. Chase has unlimited potential, in my opinion, and I look forward to watching and hearing his progress. 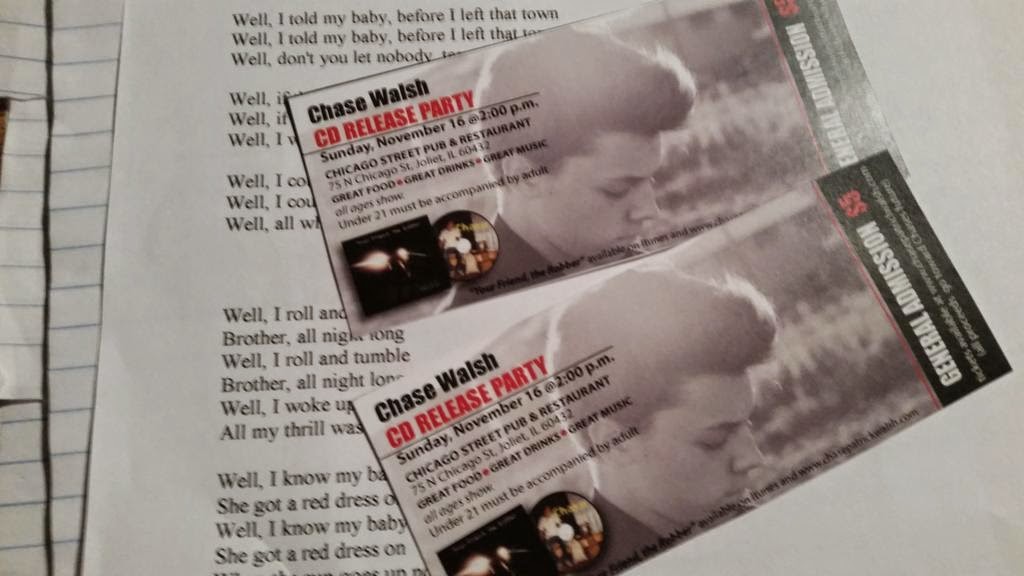 Then I was back at the Pub last night to hear J. Ross Green open for The Regressors, a very talented band of friends keyboardist Kevin Krauss, guitarist Chris Foray, bassist Tom Flavin and drummer Jeff Sledge. I've listed to their new release "These Times" and think it's very good! The recording quality is excellent and their performances showcase their range and appreciation for varied styles. Plus I LOVE J. Ross Green (aka John Green) and how he writes personal stories in local settings. His newest material is his best, in my opinion, and his performances, recordings and songwriting continue to be the best every time I hear him. I captured video of a couple of John's songs, "Blood On My Boots" and "15 Shots."

Well, that brings us up to date on the musical adventures during October. In addition to the Nov. 1 and Nov. 16 shows, remember you'll only have a few opportunities to see me perform live for a while because I'm suspending public musical appearances in 2015 to focus on an extended writing project. The big finale will be a farewell show Saturday, Dec. 20, at Chicago Street Pub. You won't want to miss it! 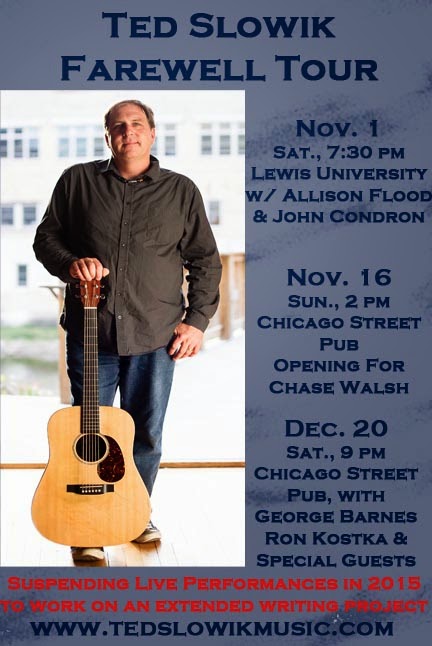