Getting ready for a gig 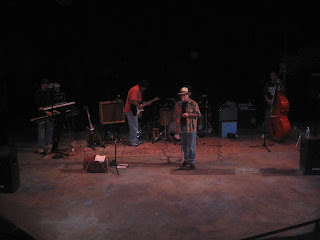 We're hoping for a good turnout. The band is really clicking these days after that great crowd at the VFW gig in Joliet. And if you can't make it to Korner House Saturday, come check us out Thursday, March 4, for "Spaghetti and Big Eddy," as we play the spaghetti dinner fundraiser at St. Ray's in Joliet, from 7 to 9 p.m.

Set 1
Gypsy Woman
Good Morning Schoolgirl
Hoochie Coochie Man
Trouble No More
Cross-Eyed Cat
One Bourbon, One Scotch, One Beer
High Heel Sneakers
Little Red Rooster
Evil
I Ain’t Got You
I Want To Be Loved
Spoonful
Love To You

Posted by Unknown at 4:09 PM No comments:

OK, so here's a list in roughly chronological order of all the songs I've written to date:

I’d Like To Know
I’m Not the One
Blue Eyed Girl
Runaway
Living Day to Day
I May Need You
Before You Love Someone Else
I’ve Got News For You
Pains of Untruth (w/ Ron K.)
Mr. Deal
Sand Castles
Take My Word
Trying to Find My Voice
I Can’t Believe You’re Gone
The Cycle
Man At 21
We No Longer Communicate
Dead Meat
Day Off
King of the Mountain
Christine (w/ Bill. A.)
On the Way (instrumental)
Jennifer’s World
Song of the Day
Mary
Excited
Anthem
Girls Like That
Coming Back for More
Keep On Drivin’
New Way Home
Balcony
Kick the Can
It Ain’t Right
Goof Off
Rough Stuff
Wrong About It
We’ll Be Free
Act of God
Years Go By
Judgment Day
Feelin’ Blue
Hell and Back
The Way You Do
Ballad of Slowiks
Little Help
Long Time Ago
Hinsdale
Game of Life
Dream So Hard
You Never Listen
Seven Deadly Sins
Don’t Have What I Really Want
Dear Editor
Got It Made
ILBCNU
On the Shelf
Hopeless Romantic
Worst Day in America
Wrong Way to Fight
On the Internet
Something Wrong
Winning Blues
Love You Like My Own
Move On
Die For You
Sparks Fly
I Don’t Wanna Fight
Posted by Unknown at 8:16 PM No comments: 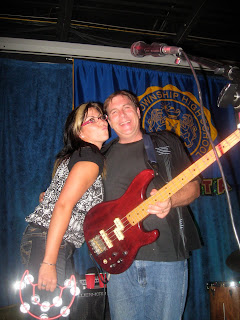 Hey, not much new to say, but I want to try to post at least once a week or so. Here's a picture from 2009 of me and American Idol finalist Gina Glocksen. She was at a party we played at the Corral, which is at my old high school, Lyons Township H.S.

I'm continuing to post a lot of demos of originals on my ReverbNation page, http://www.reverbnation.com/tedslowik. Check it out. It's been a log of fun digitizing all the material, some of which is from nearly 30 years ago! You build up quite a body of work over that much time, even if you only write a couple songs a year.

So, remember, this is a songwriting project. Try not to judge the material on the quality of the recordings, but rather the structure of the songs. I've got some more to post but imagine I'll max out at 30 or so. I've written about 70 songs total and have recordings of about 50 of them, but some just aren't even worth posting.

When I've finished posting demos of originals, not sure what I'll do. I might start a Big Eddy Springs Blues Band page on ReverbNation and get that material out there. I might post copies of various bands playing my songs over the years: Suspended Animation, Nobody Knows, George Barnes Project, even Big Eddy's done a couple of mine. We'll see. Stay tuned!
Posted by Unknown at 6:44 AM No comments: