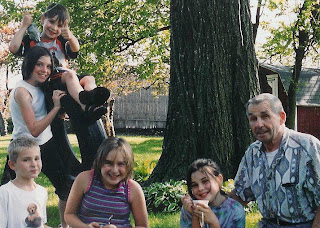 I've decided I'm going to be wrapping up my little project on ReverbNation where I've been sharing many of my original demos. I started on Jan. 19 and for the most part have been posting a new tune every day or so. I've just about finished posting all the songs I want to share. Plus, I realized that Jan. 19 is my dad's birthday, and March 5 is the anniversary of his passing. So I'll post a song a day for the rest of the week, and dedicate this entire process to my father, Jozef Slowik.

It's been fun going back through old tapes and digitizing a lot of material. I'd completely forgotten about some of it. There's still more. I made a list of 69 songs I've written. I have recordings of most of them, but some of the songs are so lame I wouldn't want anyone to hear them. Still, I like listening to them on my iPod. The music has always been something I've just tried to get out of my head, and I'm happy that I've been able to do that and get some semblance of the songs onto tape, then CDs, now digital.

Like I've said, I'm no virtuoso. My recordings are often filled with mistakes, or out of tune, or hopelessly plagued by hiss or bad mixing. Oh well. My songs are pretty simple. The lyrics of some tunes hold up real well, while others sound ridiculous today. Pretty soon I'll probably get sick of listening to them again and I'll erase them from my iPod and forget all about them again for a few years.