What happens when you get a bunch of songwriters together? 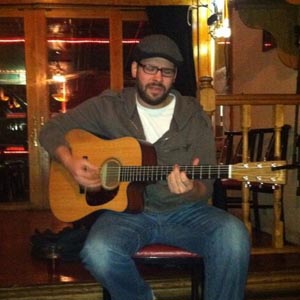 Monday night I took part in a songwriter circle hosted by Alex Hoffer at Chicago Street Pub in Joliet. Alex is a gifted singer, guitarist, writer and performer, and a good guy too! Nick Domberg and Charlie Champene kicked it off, too.

This was the first songwriter circle at Chicago Street. Monday nights are typically the slowest night in the world of live music, bars and restaurants. This was a chance to play some songs or works in progress and get instant feedback from other writers.

I hadn't participated in a songwriter circle like this before. The closest was a daylong conference in 2010 presented by The Union at North Central College. There, professionals like John Joseph Thompson, who is director of creative and copyright development at Capitol CMG Publishing in Nashville, and musician Andrew Osenga offered feedback. But there were a lot of songwriters involved at that seminar, and it was a more formal process, so everyone only got to offer one song for critique. 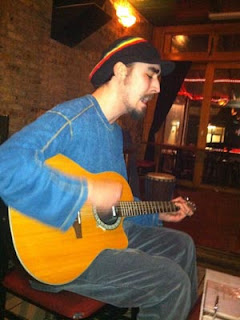 Songwriting works at many different levels. There are the lyrics, for one, and the story or message they convey. Monday night we talked about writing with the audience’s reaction in mind. Sometimes, a song is written for an audience of one. It’s about, directed at or intended for a particular individual. We talked about a lot of topics to do with songwriting.

Alex and Nick had some good discussions going about the musical side of songwriting, the chord variations, the structure and changes of a song. I admire the musicianship of them both! I took away a lot of good ideas about trying different approaches to writing. I'm more of a lyricist who only knows basic chords, but I could appreciate the discussion. 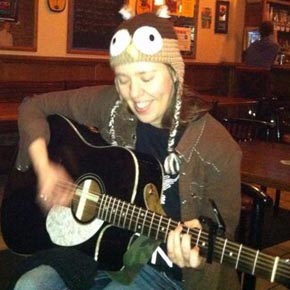 The first hour we went around the circle, each playing an original song and talking about it. The second hour we were joined by Steve Becker, Mary Beth Daw and Chris Flood. They also played some of their songs, which are very good! It’s interesting to hear different perspectives, and appreciate how other people can take a vastly different approach to songwriting than you do.

Maybe some of the other participants never considered working collaboratively on writing a song before, yet that's how a great deal of songwriting occurs.

Sometimes when someone was playing his song, others would play along quietly. Nick played harmonica on some songs in addition to guitar, so there was some jamming going on, though that wasn’t the point. 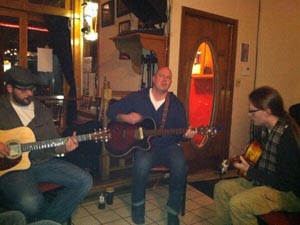 Then Alex asked us to each take about 10 minutes and write part of a song on the spot. Suggestions were taken for topics, and a topic was chosen—something about the metaphysics of architecture, I think. I’m not really sure. I didn’t understand the exercise. I thought we were supposed to write about the topic of our own choosing, but I get it now. We went around and played our bits. It was a lot of fun!

The wide circle of musicians and songwriters that come through Chicago Street is an incredibly supportive community. Thanks Triz and Kathy for supporting live local music! Alex plans to host the Monday night songwriter circles at Chicago Street on a regular basis.
Posted by Unknown at 5:16 PM No comments:

Be happy, before it's too late

I’ve been playing acoustic guitar and singing originals at open mics regularly since October 2011. I’m having a lot of fun. I got to wondering the other day: Why didn’t I think of this sooner? I started learning guitar in 1980 and wrote my first song in 1982. What took me so long to start playing my songs in front of people?

The obvious answer is that I played bass in a blues band for 11 years until September 2011. But that’s not a full explanation. I had rediscovered the guitar a while before that, during 2010. Initially I thought I’d play electric guitar instead of bass and become the frontman of a blues band. But I soon realized I’d have to spend many more hours practicing leads to become a decent blues frontman.

So my focus shifted to what I consider my strengths, which are rhythm acoustic playing and writing songs, particularly lyrics.

But what made me think in terms of being a solo artist, instead of a member of a band? Without going into detail about why I left the blues band after 11 years, something happened completely unrelated to music that caused me to rethink life at its very deepest levels. 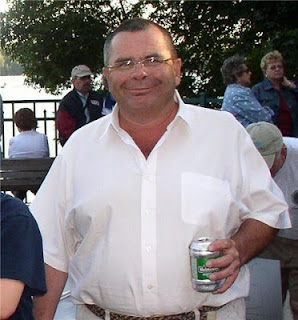 I was 44 at the time, and in the months that followed I found myself thinking, If I go at 59 like Jim, that means I’ve only got 15 years left. That’s not a lot of time.

I started thinking about what I really wanted to do, what really made me happy in life. Family, check. Day job, check. Music, um. That’s when I realized if I could change one thing about my life, it would be my music.

Playing music is one of those things that makes you happy the more you do it. When you play music every day, you’re better today than you were yesterday. That sense of accomplishment equates to inner happiness.

Before 2009 I didn’t think very much about what made me happy, and before 2010 I didn’t play music very regularly. The blues band typically rehearsed once a week, but I didn’t practice or play for fun besides those rehearsals. But in the four years since Jim’s passing I’m grateful to have discovered that playing music more often makes me happy, and I’m pleased with the progress I’m making as a musician and songwriter.

I guess the takeaway is this: Whether you’re 84 or 44 or 14, figure out what makes you happy and do it. Do it because our time here is limited, and you don’t want your last thoughts to be, I wish I’d …
Posted by Unknown at 4:02 PM No comments:

A few words about writing

All my life I've wanted to be a writer. Most of my 30-odd-year professional career has involved writing, mainly journalism. I started playing music with violin and piano lessons as a small kid, and began playing guitar at 15. I wrote my first song at about age 17.

So, where does a writer find inspiration for songs? What is the writing process like? When will the Cubs win a World Series? These and other questions will be addressed in this post.

First, writing songs is distinctly separate from performing and recording songs. That said, recording and performing artists who also write their own material are what is known as a "triple threat," meaning they can sing, dance and act or they are likely to hit a triple into the gap, one of the two. Some really talented singers and players don't have to worry about writing. They can use their other gifts to entertain and/or make a living, and writing is less important to them.

But for some "hard core" artists, writing is what they do. They may spend their whole lives searching for the right vehicles to express the messages in their hearts. "Real" writers write not for monetary gain, or for fame, but because they see the world more clearly than most, or at least in a different way, and they are compelled to share the truths they know.

All writers draw from personal experiences, to varying degrees. Some songs may be heartfelt expressions of intimate relationships with lovers, spouses, parents, siblings, children or friends. Some may be simple stories of fictitious characters, told in third person. Some may be attempts to capture timeless, beautiful elements of the world around us.

One can approach writing in an intellectual, task-oriented way. You're commissioned or assigned to write about something, so you do. But if left to his own devices, what subjects will a writer write about? What is the process for creating something out of nothing? And what's the inspiration?

Most writing takes place in the mind. Before pen ever strikes paper, or fingers touch computer keyboard, or before a single note is played on an instrument, a song or story is often first imagined. Writers need periods of quiet solitude to allow this to happen. A writer is more likely to get an idea if he's sitting in a quiet room as opposed to watching TV or doing any one of a number of other distracting things.

Sometimes the most beautiful moments for a writer are those transitions between consciousness and sleep. Some ideas come in dreams, but what do we dream about? Dreams are manifestations of what's going on in our lives. If you think really hard about a problem or situation while you're falling asleep, your subconscious often will provide a solution or at least offer clues to you in a dream. You'll usually wake up and see things differently.

Songs aren't always personal. Songs can be written as a means of social commentary. "We can change the world," that sort of thing. No life is perfect. But a song can be about an imagined ideal. The oppressed sing about freedom. The heartbroken sing about love. Writing has to be about something. Otherwise, what's the point? Don't write unless you have something to say.

In conclusion, the Cubs are going through a lot of changes. The new owners are likely to continue rebuilding the team, and Wrigley Field is about to undergo and major makeover. Make no mistake: these people want to win a World Series. Give it a couple years.