My year as a solo artist 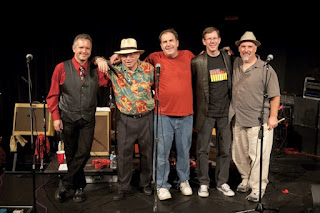 I've played a lot of music in the 10 and a half months since I last played a gig with the Big Eddy Springs Blues Band. I played bass in that band for 11 years, from 2000-2011, and it was a lot of fun. But 11 years is a long time in band years, and I think all the guys were ready for a change.

We played our last gig together on Sept. 16, 2011, in Madden Theatre at North Central College. It was a great show, sort of a "last waltz." I really enjoyed the fact that Ron was able to rejoin us on drums. Frank, who had replaced Ron a year or two earlier, was unable to make it. I've known Ron since high school and we have a special chemistry as a rhythm section, and when he had to take a leave from the band it definitely lost a lot of appeal to me. Rich, our keyboard friend since high school, came to the same conclusion at the same time. I wanted to perform and record more than the other guys Towards the end we disagreed a lot on material choices and other matters, but it ended well and we all remain friends. 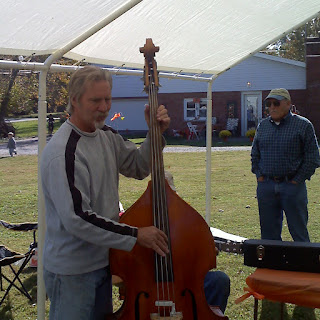 After the "breakup" I wanted to do something right away, so the first thing I did was call up my good friend Chuck "Hound Dog" Wessell. I went to visit him and his wife Melissa in Louisville, Ky., on a beautiful warm weekend in late October. We recorded 14 songs (12 originals) in 3 hours at his house Friday night, with me playing my Martin acoustic and singing. Then I played Hound Dog's upright bass and sang backups and we were done! The next day we went to a bluegrass BBQ and had a lot of fun. When I got home I printed up some CDs and gave them to friends and other musicians. This was my "Louisville" CD, and it was the first time Chuck and I had worked together since 1996.

I started playing guitar a lot, two to five hours every day. Rich, Ron and I got together a couple times at Rich's house but then Ron had to take an extended leave. I looked for open mics to play as a solo act, and would go to the third Thursday at Chicago Street Pub in Joliet. It's a great community of musicians there: Too many to name but people like Joel, Tom and Becky, Matt Biske, Bill, Don, Sledge, Pat, Kevin, just a ton of great people.

Someone told me about an acoustic open mic on Wednesdays at Tribes Alehouse in Mokena, so on Black Wednesday, the night before Thanksgiving 2011, I went and checked it out. 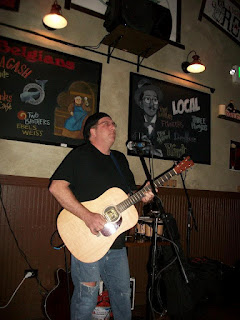 It was hosted by John Condron, a musician who I'd heard of with his band The Benefit, but hadn't met before. We hit it off right away. He's been very supportive and encouraging. I started going every week and could tell I was making progress. Not only as a guitarist, but as a performer, because there's really no other way to deal with the jitters than to just do it and get used to it and gain experience. I've met a lot of other great players there, too, like Scott, Max, John Greene, Karl, and many more.

All through the winter I played a lot of guitar. I met a guy, Eddie, who had a Boss loop pedal, and that seemed cool so I went and bought a nice one. At home that would help me practice leads a lot. I also watched a few learn-to-play-guitar videos on YouTube, my favorites were this guy Marty from NextLevelGuitar. I like his teaching style. I wrote and recorded a few songs, too.

One Saturday night in February Noah told me about a WGN radio contest to write a song about the Cubs. I've always been a fan of Steve Goodman and wanted to write a Cubs song for some time, so I knocked one out in an hour, literally, and emailed the demo to the radio station. Monday morning some acquaintances called and sent me notes on Facebook saying they heard Jonathan Brandmeier play it and talk about it that morning! He spent 8 minutes on it, and while the callers' responses weren't overwhelmingly favorable (and I didn't make the finals) it was a thrill to hear it played on WGN. 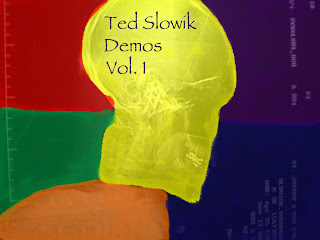 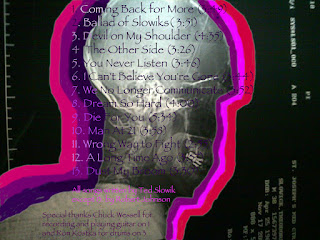 During the winter and spring I also made two collections of older demos and had fun compiling them and making cover art for them. I made a few copies and gave them to family and friends. My goal is still to get into a studio and make professional recordings, but in the meantime demos don't cost much. I record them myself mostly, on a Tascam cassette 4-track that captures an authentic analog sound, and my only costs are the CDs, labels and inkjet printer cartridges. 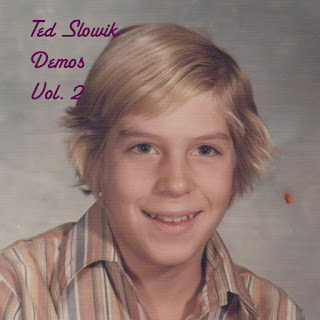 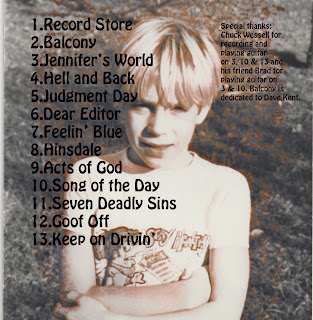 As for performing, I picked up a gig as a solo act when I played a big shindig for the closing of George Kay's music. The mayor was there, and a bunch of well-known local artists and bands. I saw Skip Griparis, who is a Lewis theatre alum. He got up and sang Route 66 with a band. I got to play one song, so I did the Everly Brothers tune Cathy's Clown, since Cathy Kay took over running the store after her husband George died many years ago. It was videotaped, too, but haven't seen it yet. 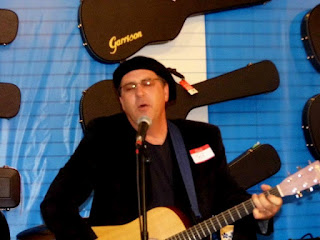 In addition to playing acoustic originals in Mokena every Wednesday night occasionally I'd perform at Thirty Buck, a bar near my house, with keyboard player Tim Placher. Every couple months we'll do a tag-team show, where he'll play 45 minutes to an hour then I'll have a turn. Continuous music for five hours. I play mostly covers, bar music. Once I took my acoustic and couldn't get it to work. Luckily it's close to home so I ran home and got my electric. Turns out there's a 9-volt battery in the acoustic that needs to be replaced every so often!
Another funny thing that happened was once at Tribes I went to get up to do my three or four songs, and my guitar was gone! There was a similar case next to where it was, and it turned out a bar regular known as Jack Bauer grabbed mine by mistake. John and the owner Nile had a good laugh about that. The next day we met at the bar and switched back so it all worked out.
I continued playing guitar a lot through the spring. In May I performed at Chicago Street Pub, playing an hour of originals opening for Chris Corkery. A couple friends came out but it was a small crowd. That was when I realized it was better to perform without the loop pedal, so I put that aside for shows. 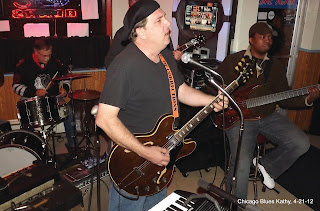 Also I started going to some blues jams with my electric guitar, a 1972 Gibson ES335 with a walnut finish. I bought it from Hound Dog in the 1980s. One place I went was the Uptown in Westmont. My old friend Snapper works there as a bartender on Sundays, and Mojo Mark Cihlar (another name from the 1980s Westmont days) hosts live music every Saturday. One week it'll be a band, but every other week is open mic. I went a couple times, and it went well. I played songs like My Babe, Give Me One Reason and 20 Flight Rock. It's a good jam because it starts early (8 p.m.) on a Saturday night, which is rare. 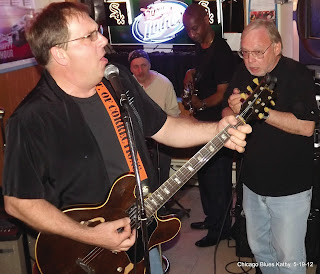 The second time I called up Big Eddy and had him meet me there, since he lives nearby. That was fun, we played Seventh Son and some other songs. I also went to Harlem Avenue Lounge and met Rich there. I got up as second guitarist to Pistol Pete, and while I had fun I realized I have a long way to go before I can hang with the real deal. I may not ever make it as a lead guitarist, but my rhythm playing, singing and songwriting have come a long way.

All through the winter and spring I was writing and recording and by the end of June I figured I had enough material to finish my first collection of new solo material in 16 years! I took some cover art, made copies for friends and have been getting a good response so far. I call it "Rough Road." 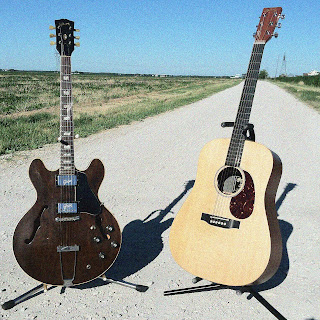 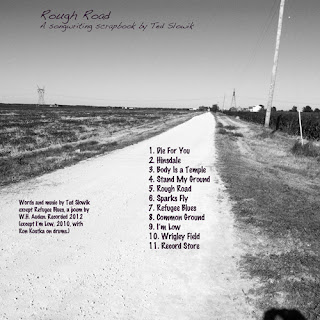 This summer's been really hot and I've lost the inclination to practice scales and work on my leads, though I'm still playing and singing a lot at home, originals mostly. In July it was fun getting together with Ron at Rich's Jam-O-Rama party. There weren't a lot of musicians there for this fifth annual affair, so I did a lot of "heavy lifting" again, meaning I got to play a lot! I like getting together with Rich and Ron--they're my oldest, best and dearest musical friends. 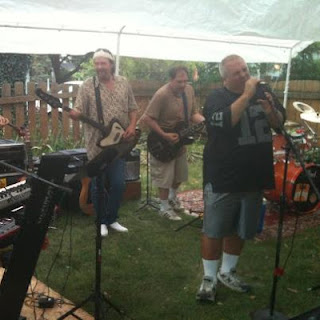 Lately I've discovered another opportunity to gain experience performing in front of people, both originals and covers, solo and with other artists. It's called William Alexander Wine Bar in Lockport and they have on open mic on Sundays. A friend I know through Rich, this incredible music teacher who plays electric cello named Tom Culver, was guest-hosting, so I went and checked it out. The first week I played acoustic covers. The next week I played acoustic originals. The third time I had the acoustic, did some originals then some other musicians joined in on some covers. Then I brought the electric and just jammed blues and rock covers with other guys. Again, while my leads need work, the rest is coming along nicely and I'm having a lot of fun. 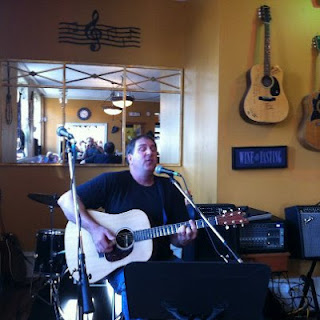 So, that's what I've been up to in the 10 and a half months since I parted ways with the Big Eddy Springs Blues Band. I hope to keep writing, performing and recording, getting together with good friends and making new ones.

Posted by Unknown at 9:54 AM No comments: