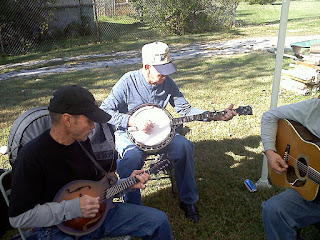 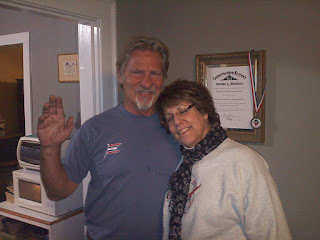 On Oct. 21 I took a day off work and drove down to Louisville to see friends Chuck and Melissa Wessel. We met in the 1980s when they lived in Lemont. Chuck and I did some playing and recording together back in the day, but we hadn’t worked together in 15 years. He recorded demos of a couple of my originals in 1996, when they lived in Edwardsville.

I’ve always loved Chuck’s recordings. He uses quality mics and equipment and has a lot of experience, so he knows where to position mics to get the best sound. Yet he’s constantly trying new things to see if it can sound better. Plus he’s a lot of fun and easy to get along with—so is Melissa!

Back in 1988 Chuck played on and recorded an original, “Coming Back for More,” and it still sounds great. A lot of people over the years have said they liked that, and I think it’s as much the recording as the song. That’s a classic example of my attitude toward some of my originals. Sometimes when I’ve got a good recording of a song I think, “OK, that’s it,” and I’ll shelve it. Not play it live again for years. I was like that with “Runaway,” one of my earliest songs. I thought the live recording by Nobody Knows was the definitive version. I recently rediscovered that song and have been playing a new version on the acoustic.

So I drove the five hours to Louisville on a Friday afternoon by myself, listening to some old recordings on the way. I get there early evening, crack a beer and pretty quickly we start recording. Everything was one take. I think I stopped once or twice when I made a really bad mistake. I played guitar and sang. Within an hour or so we had recorded eight songs! Melissa got home from work and we kept going. We did a total of 14 songs, and he even had me go back and add a bass track. I got to play his sweet-sounding upright. I sang a little harmony while recording the bass, where it felt right, and the mics picked it up fine.

A Whiter Shade of Pale

I told Hound Dog my main goal was to make a four-song demo, so that’s why I included a couple cover versions. I think my arrangement of the songs by Procol Harum and Mumford & Sons are pretty representative of what I do live solo on the acoustic. The recording came out great—I’m really happy with it. I picked the four songs for the demo and learned to print labels for the CD.

The next day, Saturday, Chuck took me to a fish fry where there was bluegrass music. We drove about 20 minutes into the hills. It was a great day—sunny and about 70. We were the first ones there and pretty soon a bunch of players started showing up. Phil was the host. Chuck said they usually get together on Monday nights in Phil’s garage. They used to get together at a bar nearby but the bar was a dive and eventually closed so now they gather at Phil’s.

Everyone was real nice. There had to be six to 8 guitarists, three or four mandolin players and a couple banjo players. Chuck brought his upright bass, and another guy brought his. A couple guys—a guitarist and a mandolin player—just started and as soon as I heard them tuning up and playing I wandered over to get a better listen. So I had a great seat close to the action. I had my guitar but for the first couple hours I just sat and drank and listened as the circle grew.

The way they play bluegrass is really great. They sit in a circle and take turns choosing the next song. Sometimes there’s singing but a lot of times it’s just playing, and trading solos among the instruments: guitar, mandolin, banjo. People just listening like me sit outside the circle but close enough to hear. Guys wander in and out of the circle when they want a break. It’s real fraternal, laid back and fun.

I eventually worked up the courage to get my guitar out of its case. Chuck had given me a few tips about playing bluegrass, so I was ready. It’s all downstrokes, no strumming. It’s usually in the key of G, it changes to D a lot and sometimes A. I wasn’t ready to take a solo so I didn’t have to worry about that. I joined the circle next to this banjo player who was really good, Mark, and he muttered some encouragement my way. After a couple songs playing along the food was ready and everyone was getting up so I thought, “Here’s my chance!” I started playing a bluegrass version of the old Charlie Rich song, “I Washed My Hands in Muddy Water,” and I get a couple notes in and Chuck joined in with his bass and Jerry on mandolin. So I can say I played in a bluegrass circle!

Chuck and I were talking about how it’s so different from the way rock or blues is played. When you go to play an open mic at a rock or blues venue, you wait your turn, you get up, do your couple of songs then get off. Sometimes there’s crossover but if you don’t know the other players you’re on your own pretty much.

With bluegrass it’s more like, “All for one and one for all.” I’ve seen that in folk somewhat too, where a group gets in a circle and plays and sings together acoustically on their instruments. I visited the Two-Way Street Coffeehouse in Downers Grove recently and it was like that, only I was the youngest person there and the material was either too esoteric or unfamiliar. The people were all nice but it just wasn’t as much fun as the Louisville experience. With folk it’s about singing the words; with bluegrass it’s about playing the music.

Posted by Unknown at 4:13 PM No comments: